Benevento and Parma share the honours after a 2-2 draw 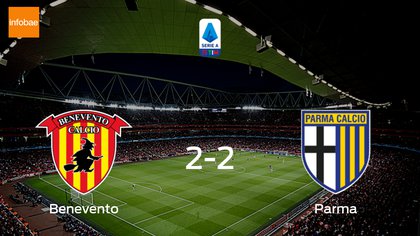 Benevento were held to 2-2 draw by Parma down on Saturday at Stadio Ciro Vigorito. Benevento were looking to pick up points after winning last match. Parma, on the other hand, lost 2-1 in the last match they played against Genoa. After today’s result, Benevento are in 15th place on the table and has 30 points while Parma sit in 19th with 20 points after 29 matches.

Parma started strong in the second half and were able to dominate, thanks to a goal from Jasmin Kurtic at the 55 minute mark. However, each side looked hungry to win and Benevento then found the back of the net, 67 minutes in thanks to Artur Ionita, taking the score to 2-1. In the end though, their lead was short lived, as Dennis Man equalised for Parma just before the final whistle. The game ended 2-2.

There were bookings for Perparim Hetemaj and Giuseppe Di Serio from Benevento, and Mattia Bani, for Parma.

Benevento next face Sassuolo and Parma are at home to AC Milan.