Home defeat for The Great Danes, as Nimes secure the win (2-1) 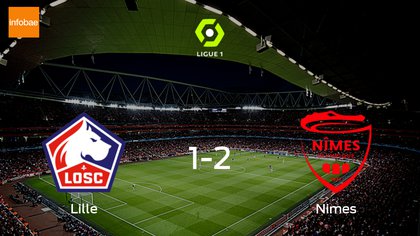 Lille were defeated at home by Nimes at the Stade Pierre Mauroy on Sunday. With both teams drawing in their previous fixtures, they were keen to pick up points. Lille were looking for a victory after a scoreless draw against Monaco in their previous match. Nimes, on the other hand, are struggling for form following a draw in their last match. As the table looks today, Lille are in 1st place on the table and has 63 points while Nimes sit in 18th with 29 points after 30 matches.

Nimes started the first half well, with Moussa Kone finding the net after 12 minutes. However, they were unable to maintain their lead, Xeka managed to equalize and take the sides off at the 20 minute mark at 1-1. Nimes in turn, then responded just before half-time increasing their lead with an effort from Renaud Ripart. The score at half time was 1-2. Both teams unable to deliver anything further, the score remained at 2-1 at full time.

The referee booked Jonathan Bamba and Boubakary Soumare for Lille.

Lille will next travel to PSG, while Nimes will face St Etienne at home.